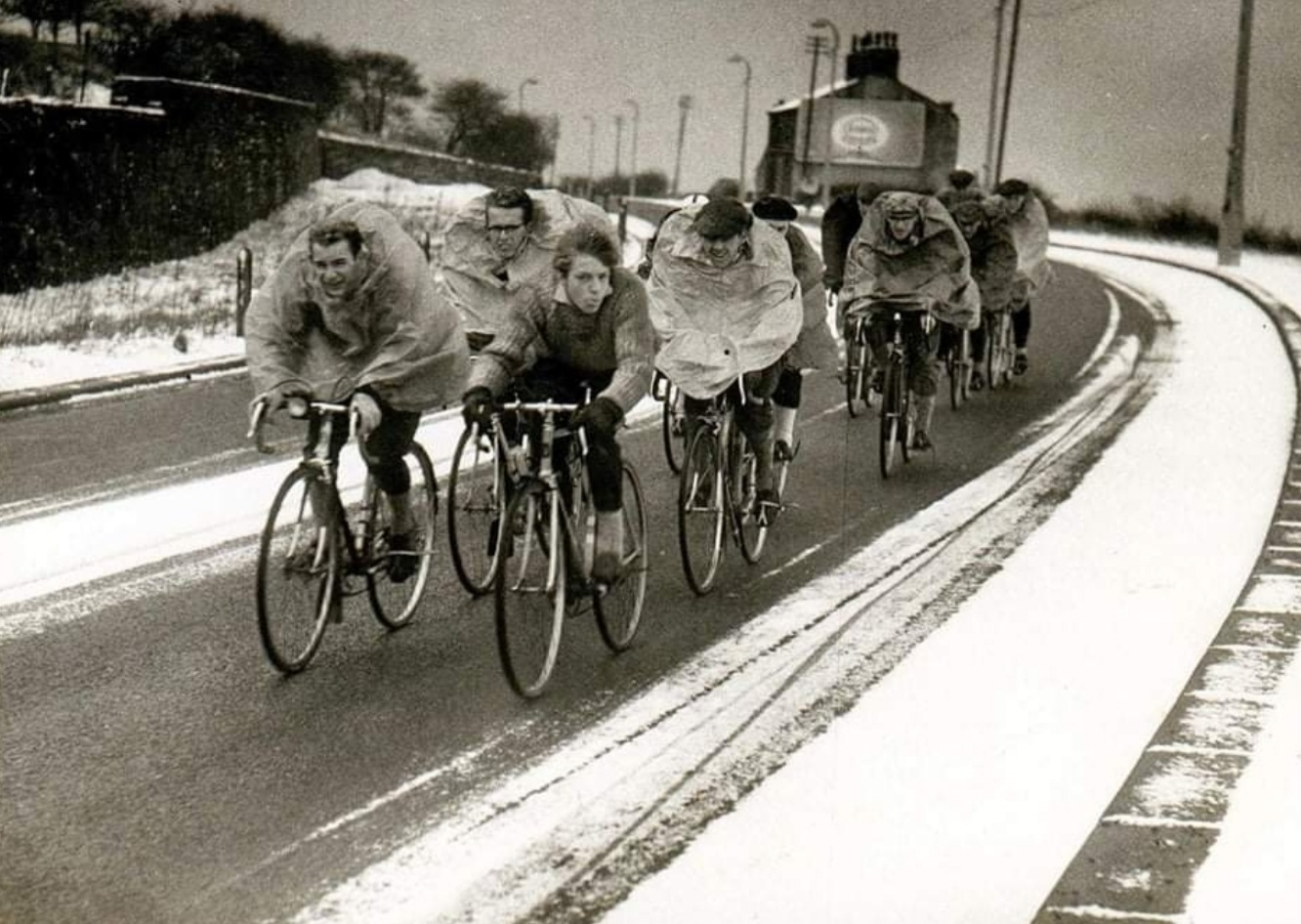 Hello again,
I’ve been posting my late father’s memoirs bit by bit and I’ve come to the section where he joined Bury Clarion as a Rookie in 1951, so I thought I’d post it, as it might be of interest to current club members and perhaps for the Clarion’s historical archive.

Bob Chadwick, was a keen member back in the 1950’s and led many a run. He also rode with my mother, Joan Chadwick, on a tandem. He has recently passed away, aged 92, but this black and white photograph is among his effects. It’s not high resolution and a bit blurry, but it shows him out on one of the Bury Clarion rides with like-minded hardy souls. He’s the one in the cape on the left at the front. I can’t give you a year, but pre 1957.
I thought some of you might like to see it. It’s a bit of club history!

The Cycling Bug 1950’s Part 1.
Having returned from National Service, he wanted to get out from under th parental thumb.
“I embarked on an course of action which virtually guaranteed an alternative Sunday activity and, much to my parents disapproval, I joined a cycling club. It was a decision that totally altered my life style.
I had always had a bike but I wouldn’t have called myself a cyclist in the true sense of the word. I had a Raleigh Lenton Sports with Sturmey-Archer three speed and Dyno hub and steel wheels. One Saturday night in the summer of 1951 I was talking to my cousin about cycling and we decided to go for a Sunday run with a cycling club.
There were no clubs in Radcliffe so we went to Bury to ride with the Clarion. The meeting place, published in the Bury Times, was outside the Theatre Royal and there was a crowd of cyclists already assembled there. They were split into two sections and seeing our bikes and our generally rookie appearance we were strongly advised to go with the “A” section. This we did and on a beautiful sunny day we rode to Southport and back at a leisurely pace. This beat church and Sunday school into a cocked hat but it all seemed too easy so we decided to go again the following week but this time with the “B” section.
The first thing we noticed were the bikes, hand-built frames, alloy wheels, derailleur gears etc. The run was to Malham in the Yorkshire Dales and, led by a sadist by the name of Charlie Westlake, we set off at a cracking pace with me and cousin Jim hanging on like grim death. It was forty miles on the outward run and by the time we got there we were absolutely knackered and the thought of having to ride home filled me with dread but we did survive although it took me to mid-week to fully recover. However, on the plus side I had seen some wonderful Yorkshire scenery, made some new friends and discovered the alternative lifestyle open to me as a bone fide cyclist provided I could get fit enough. There was racing, Youth Hostelling and loads of social events.
My father’s idea of sport only extended to cricket and football so again it was met with disapproval and to add salt to the wound he found out that the Clarion was a socialist organisation. So, to sum it up, in my parent’s view, I was skipping church, riding out with a bunch of commies from Bury, and frequenting public houses into the bargain. Cousin Jim never came out again after that first “B” section run but I persevered and soon realised that I was becoming quite fit but the bike was not really suitable.
I bought a Bates hand-built frame, which I still keep in the loft to this day for sentimental reasons, it cost almost two weeks wages and then I had to assemble all the rest of the components over a period as funds became available. This machine had to suffice for both racing and general touring so I had two sets of wheels, both alloy but the racing wheels were “sprints and tubs” i.e., special tubular tyres pumped up to over 100 psi. for minimum rolling resistance. Thus equipped I graduated to the status of a clubman and outside of work my life revolved round cycling.
Sport in my dad’s opinion consisted of cricket and football and all other sports were regarded as of no interest. He bought me a cricket bat which languished in a cupboard for ever after and therefore I was a great disappointment and all my achievements in cycling modest as they were counted for nothing but nevertheless, I did what I enjoyed and revelled in it
These were the heydays for cycling, petrol was still rationed and universal car ownership was far in the future, I was never in the top league for racing but long distance fast touring was my speciality. I built up tremendous stamina for 100 mile plus club runs over hilly terrain and all holidays were spent touring. I have, without any other means of transport, toured most parts of the British Isles from Cornwall to the far north of Scotland. The countryside was ours alone for the most part and tourist attractions were often free or at least very cheap. I have wandered among the monoliths of Stonehenge and visited the Bronte museum at Howarth uncluttered by car parks and hordes of visitors. It is an unfortunate fact that universal access to beauty spots leads to excessive commercialisation, which destroys the very thing that people come to see.
Every Clarion section organised an annual “reliability ride” with a certificate presented for the completion of the event and these were right up my street. Our own reliability starting from Bury went through the Yorkshire Dales to Ingleton then across to Lancaster and back to Bury via Preston and Bolton, a distance of about 120 miles. The Manchester Clarion ran one to Sheffield and back, twice through the Peak District, taking in the Cat and Fiddle on the way out and Mam Tor on the homeward leg. Finally, the Leigh- Llangollen and back, 104 miles not including the twenty-mile ride to and from Leigh to home, we did not have cars with roof racks in those days.”
The photo below is of a plaque he and my mother received in 1956 as Best Club Members. 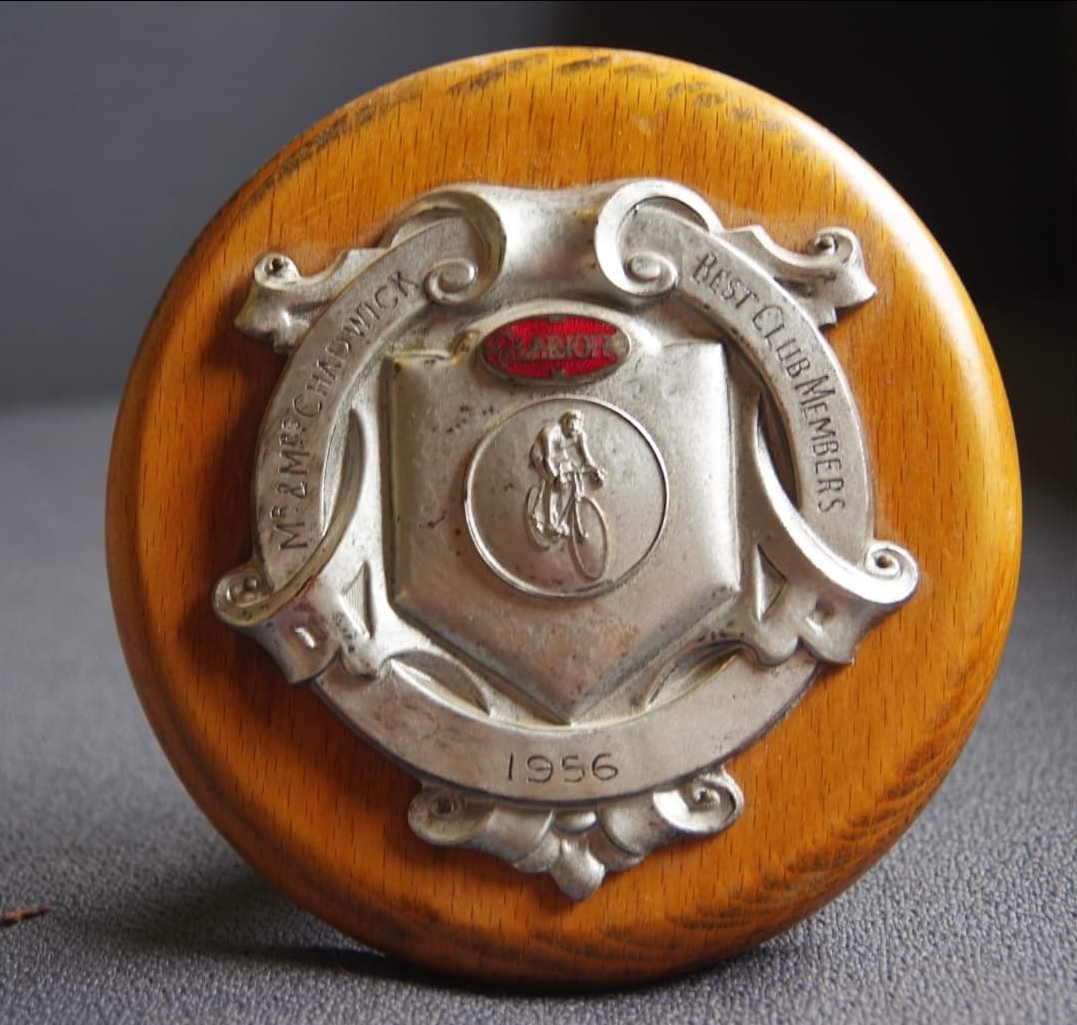 Type to search or hit ESC to close
See all results
We use cookies on our website to give you the most relevant experience by remembering your preferences and repeat visits. By clicking “Accept”, you consent to the use of ALL the cookies.
Cookie settingsACCEPT
Manage consent

This website uses cookies to improve your experience while you navigate through the website. Out of these, the cookies that are categorized as necessary are stored on your browser as they are essential for the working of basic functionalities of the website. We also use third-party cookies that help us analyze and understand how you use this website. These cookies will be stored in your browser only with your consent. You also have the option to opt-out of these cookies. But opting out of some of these cookies may affect your browsing experience.
Necessary Always Enabled
Necessary cookies are absolutely essential for the website to function properly. These cookies ensure basic functionalities and security features of the website, anonymously.
Functional
Functional cookies help to perform certain functionalities like sharing the content of the website on social media platforms, collect feedbacks, and other third-party features.
Performance
Performance cookies are used to understand and analyze the key performance indexes of the website which helps in delivering a better user experience for the visitors.
Analytics
Analytical cookies are used to understand how visitors interact with the website. These cookies help provide information on metrics the number of visitors, bounce rate, traffic source, etc.
Advertisement
Advertisement cookies are used to provide visitors with relevant ads and marketing campaigns. These cookies track visitors across websites and collect information to provide customized ads.
Others
Other uncategorized cookies are those that are being analyzed and have not been classified into a category as yet.
SAVE & ACCEPT